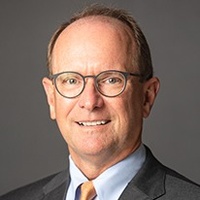 Over the past 30 years, Robert has helped clients steadily pursue their investment and retirement goals through some unprecedented economic climates. You can rely on him to help you understand not only the makeup of the investments you own but also why those investments were recommended for your portfolio and how they fit within your overall financial plan. He is also a senior portfolio manager which means that when you work with Robert, your portfolio will not be managed by a third party, but directly by Robert himself.

As an advisor who is committed to serving the needs of his clients, Robert has completed the rigorous requirements to achieve certification as a CERTIFIED FINANCIAL PLANNER® professional and continues to meet ongoing certification renewal requirements.

Robert attended the University of Georgia, where he was a member of the Sigma Alpha Epsilon (SAE) fraternity and served as president of the fraternity his senior year. Upon graduating from UGA in 1983, he began his career in financial services at Thomson McKinnon Securities as a financial consultant. He later worked at Morgan Stanley Smith Barney and RBC Wealth Management. Eventually, Robert joined Morgan Keegan in 2009 and on April 1, 2018 formed Pierson Wealth Management

A native of Georgia, Robert grew up in Culloden. Today, he and his wife, Sandra, call Atlanta home and attend St. Philips Cathedral. They also have two grown children, Morgan and Rob. In his spare time, Robert enjoys playing golf.